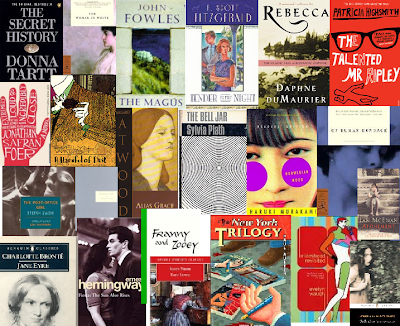 Taking a cue from Savidge Reads' Great Reads  and the Waterstones Writers Table, I decided to do a page of my best reads. If I had a huge table with all the books that have meant something to me spread out on top, it would look something like the above collage. It's difficult to come up with just one favorite although if I had to pick three they would definitely be the first three on the list below. The rest are in alphabetical order. Every book on the list of My Favorite Novels, has stayed with me since I've read them. Many have been reread and all my copies are treasured ones. Honorable Mentions are all very, very good books. Although they are not part of my top list, all of them are highly recommended.

I may have forgotten some books so I'll just keep adding as I remember them. I suppose this page will also keep evolving. Past favorites may move down to the Honorable Mentions or vice-versa.

Have you read any of the books below? If you'd like to recommend a book based on these lists, I'd love to hear it so please leave a comment or drop me a line.

The Secret History by Donna Tartt
Jane Eyre by Charlotte Bronte
The Magus by John Fowles
The Neopolitan Novels  by Elena Ferrante
East of Eden by John Steinbeck
The Glass Family stories by JD Salinger
Leviathan by Paul Auster
The Woman in White by Wilkie Collins
Rebecca by Daphne du Maurier
Tender is the Night by F.Scott Fitzgerald
In the Woods by Tana French
Never Let Me Go by Kazuo Ishiguro
Of Human Bondage by Somerset Maugham
A Handful of Dust by Evelyn Waugh
Brideshead Revisited by Evelyn Waugh
The Tom Ripley Novels by Patricia Highsmith
When We Were Orphans by Kazuo Ishiguro
The Go-Between by L.P. Hartley
Atonement by Ian McEwan

Alias Grace by Margaret Atwood
Pride and Prejudice by Jane Austen
The New York Trilogy by Paul Auster
The Brooklyn Follies by Paul Auster
The Amazing Adventures of Kavalier & Clay by Michael Chabon
Extremely Loud and Incredibly Close by Jonathan Safran Foer
Le Grand Meaulnes by Henri Alain Fournier
The Wind-Up Bird Chronicle by Haruki Murakami
The Ocean at the End of the Lane by Neil Gaiman
The Song of Achilles by Madeline Miller
The Quick by Lauren Owen
The Sense of an Ending by Julian Barnes
I Capture the Castle by Dodie Smith
The Confederacy of Dunces by John Kennedy Toole
The Little Stranger by Sarah Waters
They Were Sisters by Dorothy Whipple
The Luck of the Bodkins by P.G. Wodehouse
The Mating Season by P.G. Wodehouse
The Post-Office Girl by Stefan Zweig
Talking It Over by Julian Barnes