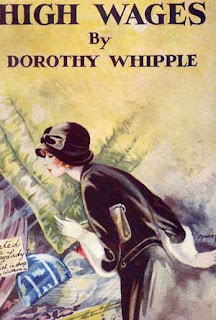 (The cover of the original hardcover edition from 1930)
Although High Wages is the latest Dorothy Whipple novel to be published by Persephone books, it's actually one of her earlier novels. It was originally published in 1930. High Wages has all the characteristic Whipple charm that her more famous books have, however, I don't think it's one of her best and I'd only recommend this to those who are already fans of her work.

(endpaper of the Persephone edition of High Wages)
High Wages is about Jane, an ambitious young girl who works in a draper's shop just before the first world war. After a few years, she sets up her own dress shop with help from a wealthy friend. Although unlucky in love, Jane proves to have a keen business sense that makes her little boutique an instant success.

The preface of the novel was written by Jane Brockett and she mentions that High Wages has tremendous historical value because it covers the consumer culture and retail therapy of that particular era. It is indeed interesting to see how women viewed fashion in a small northern town in England just before the Great War. This novel is also unique compared to other ones from this period because it's about a woman who embarks on her own career and does it so remarkably well without the help of any man. Though not a great novel, it's still very engaging. Whipple portrays village life wonderfully and the cast of characters as in all her novels are very well-drawn and quite interesting. High Wages, though not the best Whipple, is still a charming, old-fashioned and delightful novel.
Email Post
Labels: Dorothy Whipple Persephone books