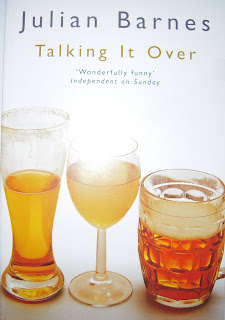 This book has such an appropriate title because Talking It Over by Julian Barnes is a whole book about three friends doing just that... 'talking it over.'

Stuart and Oliver are complete opposites but they've been best friends since school and now Stuart has met and fallen in love with Gillian. But just after their wedding Oliver discovers he's in love with Gillian too. Doesn't that sound like such a mess? But Barnes handles it all very well and so originally as the three people involved all give their different points of view of how everything happened and why. Each of their voices are so unique and you can't help but feel you're at a pub somewhere and listening to three friends talk it out. Even now I'm not quite sure which side I'm on because I liked every character. Ok, this is actually my second reading and I think I enjoyed it more when I read it over a decade ago when I was in my twenties. Still, it's a fun and witty read. Here's a little sample.

Stuart   It's now. It's today. We got married last month. I love Gillian. I'm happy, yes I'm happy. It finally worked out for me. It's now now.

Gillian   I got married. Part of me didn't think I ever would, part of me disapproved, part of me was a little scared, to tell the truth. But I fell in love, and Stuart is a good person, a kind person, and he loves me. I'm married now.