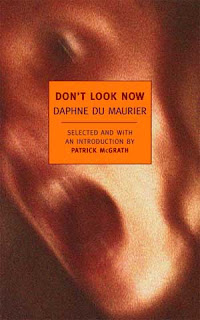 Here's my first review for the NYRB Reading Week: Don't Look Now by Daphne Du Maurier. As readers of my blog know, I'm a big, big fan of Daphne but I'm not a fan of short stories and that's probably why I've been avoiding her short story collections. However, I must say that I'm quickly being converted. Don't Look Now is probably the first short story collection that I've read straight through. This is an excellent book of just nine stories dealing with the creepy, the sinister and the macabre.

I was already familiar with the first and title story, Don't Look Now, having seen the spine-tingling film from the 70s starring Donald Sutherland and Julie Christie. A couple getting over the death of their daughter are on holiday in Venice and encounter two elderly women with psychic powers. This was my favorite story from the entire book and it makes me want to see the film again which was, in hindsight actually very true to the story and excellently done. This story is a masterpiece that will haunt you for a long time.

My next favorite was Monte Verita, an atmospheric and  very long short story about two men in love with a woman who escapes to a monastery that seems more otherworldly than real.

The Blue Lenses was a creepy and at times darkly humorous story about a woman who undergoes an eye operation only to wake up seeing the humans around her with animal heads. The animals depict the true natures of the persons they inhabit. A snake head for example for a sneaky and two-faced nurse who's having an affair with the patient's husband.

The Birds was made into a Hitchcock film in the 60s but this story is completely different from the movie. It's darker and completely chilling.

La Sainte-Verge is about a sailor's wife who loves her husband blindly and so obsessively that as she kneels in church and prays for her loved one's safe return she literally sees what she believes.

There are four other stories in this book that are worth reading. Each one is a page-turner and so different from the last. This is a  great collection that's worth having on your shelf because you'll definitely be rereading your favorites through the years. As usual, Du Maurier's writing is perfect. Her stories are original and well-crafted as well as vividly atmospheric. Plus to top it off, this wonderful NYRB edition includes an insightful introduction by the writer Patrick McGrath.
Email Post
Labels: Daphne Du Maurier NYRB