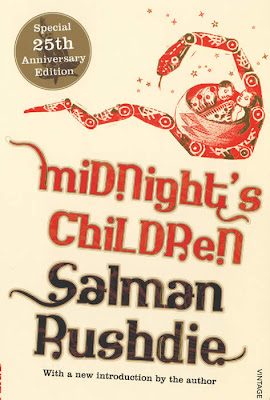 I'm doing a group read together with Arti at Ripple Effects and Meredith at Dolce Bellezza.
We'll be tackling Midnight's Children by Salman Rushdie. I've been wanting to read this for a while and when I saw that Arti was planning to read it in 2012 in preparation for the film release later this year, I suggested a read-a-long. My only experience with Rushdie has been reading and abandoning The Ground Beneath Her Feet which isn't exactly his most popular novel. Midnight's Children won the Man Booker Prize in 1981 and then went on to win the Booker of Bookers in 1993, which commemorated the awards 25th anniversary. The latter award was given after the public voted from a selected shortlist.

The synopsis from the Amazon website:
Saleem Sinai is born at the stroke of midnight on August 15, 1947, the very moment of India’s independence. Greeted by fireworks displays, cheering crowds, and Prime Minister Nehru himself, Saleem grows up to learn the ominous consequences of this coincidence. His every act is mirrored and magnified in events that sway the course of national affairs; his health and well-being are inextricably bound to those of his nation; his life is inseparable, at times indistinguishable, from the history of his country. Perhaps most remarkable are the telepathic powers linking him with India’s 1,000 other “midnight’s children,” all born in that initial hour and endowed with magical gifts.

Since Rushdie won't be an easy read we decided to take this very slowly so this will be a long and relaxed group read. We don't want it to interfere with other reading plans. The book has 533 pages and is divided into three parts with the second part being the longest. We'll begin in March, and for four months at the last day of each month we'll post our review.

Here's the exact schedule for postings:
As you can see we'll have more than enough time to get through the 533 pages. If you'd like to join, please let us know and take note of the schedule above. We'll do a reminder post in early March.
Email Post
Labels: Salman Rushdie