The Yellow Wallpaper and My Other Viragos 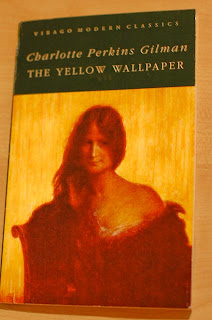 I've been ignoring my Viragos lately. I haven't read one for a while and I've been feeling guilty about it. About a year and a half ago I started collecting Virago Modern Classics. VMCs are books published in celebration of  frequently neglected women writers mostly from the early part of the twentieth century. I love the green-spined versions with beautiful cover art, most of which are now out of print. I currently own 62 Viragos which I acquired through bookmooch, through the wonderful Virago group at Library Thing and through the internet. They're not available where I live and I've had to rely on trips abroad to find them. Last summer, I drove Mr.B. nuts because I wanted to stop at every second hand bookstore in Amsterdam. But I must say, there is a certain thrill in finding these little green-spined books. And if you're wondering...no, I didn't purchase every Virago I saw. There are surprisingly a lot in Holland.

I'm ashamed to say though that of the Viragos I own, I've only read 15. There have been some duds among them but there have also been some marvelous discoveries. The ones that standout are The Tortoise and the Hare by Elizabeth Jenkins, Mary Lavelle by Kate O'Brien, A Woman of My Age by Nina Bawden, The Enchanted April by Elizabeth von Armin, Good Behaviour by Molly Keane and All Passion Spent and No Signposts by the Sea by Vita Sackville-West.

I now have a new Virago to add to that list,  the Yellow Wallpaper by Charlotte Perkins Gilman. It's such a slim little novella at 37 pages that I finished it in one sitting. It's a powerful and chilling masterpiece about a woman forced into confinement in the upstairs nursery of an isolated house. The room has barred windows and yellow wallpaper with a maddening pattern. We see her slowly go insane from idleness and lack of mental stimulation. She spends her days staring at the yellow wallpaper which winds itself into her mind and slowly drives her insane.


"I believe and follow that pattern about by the hour. It is as good as gymnastics, I assure you. I start, we'll say, at the bottom, down in the corner over there where it has not been touched, and I determine for the thousandth time that I will follow that pointless pattern to some sort of a conclusion."

Highly recommended. A chilling portrait of a the helplessness of a woman trapped in a Victorian marriage.

Have you read this? What did you think? Do you like Virago Modern Classics and if so, which ones did you like best?