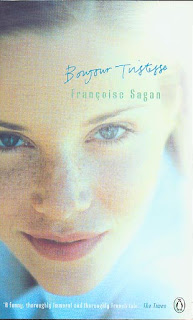 Bonjour Tristesse or 'Hello Sadness' reads like a Persephone novel. I think it encapsulates a time in history, this time French, when the world was a bit more carefree but some things were still quite scandalous. I love the way it's written too, from the point of view of an egocentric and selfish adolescent but somehow she isn't unlikable. After all, she's only seventeen and we can forgive her some of her faults. This French classic written by Françoise Sagan in 1954 when she was only eighteen was an overnight sensation in France. The French newspaper, Le Figaro, on its front page, called Sagan "a charming little monster."

Cécile and her widowed father, Raymond,  live a hedonistic lifestyle, partying and having fleeting affairs. They spend the summer in a villa on the French Riviera together with Raymond's current flame, Elsa. The holiday starts of in an idyllic way with the threesome swimming and suntanning. Cécile meets a young man closer to her age, Cyril, and starts a summer fling. Suddenly an unexpected visitor arrives in the person of Anne, an old friend of Cécile's mother. Anne is cultured and intelligent and very different from her father's past girlfriends. Elsa is suddenly replaced and Raymond and Anne announce their impending marriage. Cécile's world is thrown into chaos as she fears her life with her father will never be the same. She enlists the help of Cyril and Elsa to help destroy her father's new found happiness but her plan goes wrong and ends in tragedy.

"A strange melancholy pervades me to which I hesitate to give the grave and beautiful name of sadness. In the past the idea of sadness always appealed to me, now I am almost ashamed of its complete egoism. I had known boredom, regret, and at times remorse, but never sadness. Today something envelops me like a silken web, enervating and soft, which isolates me." (page 1)

This is a novel about the self-centeredness of adolescence and the pain of growing up. It reminded me of The Go-Between by L.P. Hartley because both contain one shattering event that immediately thrust the protagonist from childhood into adulthood.

I also saw the film Bonjour Tristesse (1957) based on the book, as part of the Read the Book/See the Movie Challenge hosted by C.B. James and I actually found it more entertaining than the novel. It stars the stunning Jean Seberg who I later found out had such a tragic end at the age of 40. The film also stars David Niven and Deborah Kerr. It's beautifully shot alternating in black and white and colour. I loved Seberg's clothes and bathing suits. It's a gorgeous film. Here are some pictures: 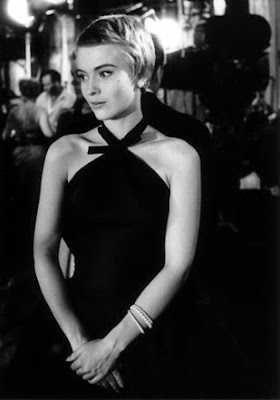 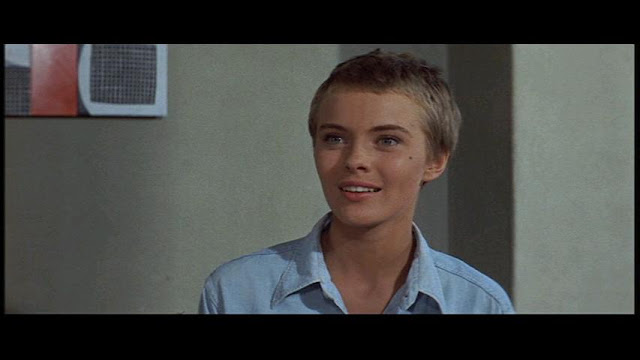 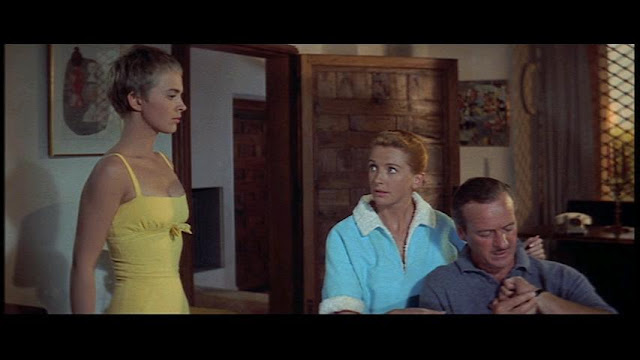